Wow. It has been way too long since I have sat down at the computer to write a post. If you are reading this, thanks for sticking around! I have a really good excuse… excuses… for not writing lately. 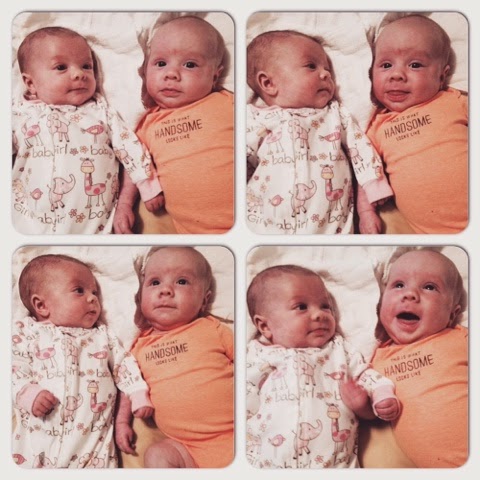 These 2 keep me busy. It has taken us a little while, but I think the 3 of us have finally figured out our daily routine. It was rough for several weeks, and from time to time we do stray from our routine. For the most part, I think they will keep me!

**I do not have a picture for this excuse. You’ll see why.**

I gave it up. I fought hard for nearly 10 weeks. Seriously. There was nothing fun or relaxing about it. It started out rough with my milk not coming in until the babies were almost 5 days old. When it did come in, I was only allowed to pump and take what little amount I had to the NICU for the nurses to mix with the high calorie formula. Before we brought Ryker and Averlee home, my lactation consultant encouraged me to put the twins to breast whenever I felt the time was right. The thing was, I had already begun pumping. I was pumping every 2-3 hours. Since I was pumping, I could keep up with how much milk I was producing and how much the babies were actually eating. Tracking the babies’ intake was kinda important since they were preemies and them gaining weight was a really big deal. As time went by and they started needing more and more milk at each feeding, I could not keep up. I was waking up to pump in the middle of the night 2-3 times on top of waking up with newborns. My husband was a wonderful help with giving bottles, but there came a time when I just wanted to sleep. I cut back on my night time pumping to just pumping one breast while I was feeding a bottle to a baby. Once my husband went back to work, pumping during the day became difficult. It seemed everytime I sat down and got all hooked up, one or BOTH babies would start fussing or crying. It isn’t easy to hold TWO unhappy babies AND those pump shields! There were many times the babies just had to cry for 15-20 minutes while I pumped. Eventually I purchased a pumping bra that held the pump shields in place for me so my hands would be free to pop a paci in a mouth or shake a rattle. Even with the pumping bra, I was not able to dedicate the time I needed to pumping as often as I needed to, so I started pumping when I had a chance and didn’t fret over if it happened every 2 hours or not. I did try nursing the babies at least once a day after they reached 4 weeks old; however, Averlee never would latch on. Averlee also had (still has) awful reflux. It was better for us to give Averlee bottles so we could keep up with just how much we were giving her and how much we thought she was actually keeping down.  Ryker would latch, and he would nurse for a good 15-20 minutes; however, he was still hungry after nursing so I would still have to give him a bottle of formula. A couple weeks ago, I had a day where I realized I was rushing through feedings just so I could pump 2oz of breastmilk. That’s right. I was only getting 2oz each time I pumped. I was taking the supplements. I was eating like crazy. I was drinking water constantly. I had bought a fancy pump. I had done everything I knew to do. I was still only getting 2oz. Considering Ryker was eating anywhere from 5-6oz every 3 hours and Averlee was eating 3-4oz… me pumping 2oz every 3-4 hours was not cutting it. AT. ALL. So I weighed my options. I talked to my husband about it. I prayed about it. I was so afraid to give it up. I felt like a failure. I just had to keep pushing forward. A couple days later, I pumped first thing in the morning and I only had 1oz. The next time I pumped…. I had less than that.

I want you to know, I quit pumping that day. I didn’t quit because I decided to. I quit because my milk was gone. I had nothing. I felt a relief that the decision was somehow made for me and I didn’t have to make the decision myself. I now have more time to play and cuddle with my little ones. We can actually leave the house and not have to worry about lugging my pump, cooler, and ice pack around with us. We are F-R-E-E.   Side note: Now we solely depend on the mail man to deliver our expensive high cal formula every week though!

We moved! Yes. My husband and I had the bright idea to buy a house and sell a house all before the babies turned 8 weeks old. WE. ARE. CRAZY. I do not recommend it at all, but we survived! We have been in our new house for almost a month. It really is our dream home! I have a kitchen island and a wrap around porch like I’ve always wanted. The twins will have their own rooms once they get old enough. I have a workout room. My husband has room to build his machine shop the way he wants it. We are extremely happy in our new home!

So there are my excuses! Please forgive me! I hope to be back in the saddle for good sharing the adventures of being a mommy to twins and an 11 year old before too long. Until next time….

Averlee had her first haircut over the weekend compliments of Meemaw!